Friday Night Magic (FNM) is a weekly Magic: The Gathering tournament created about 2000. Promotional foil cards, sometimes with alternate art, are given to the best placed participants as well as randomly chosen ones.

Disenchant is exceptional in this program: It is said that it wasn't supposed to be an FNM promo in the first place but a judge rewards promo. Due to internal discordances at Wizards of the Coast, it remained officially unreleased for three years and finally showed up in July 2003 as a substitution for Crystalline Sliver that had been stolen. That card in turn reappeared later and became a Grand Prix participation bonus. 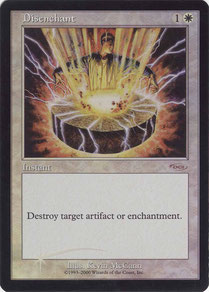