"Summer Magic" or "Edgar" was printed in the summer of 1994. It was supposed to be marketed as 4th Edition but at that time contained the same cards as Revised. Revised suffered from various deficiencies like the misprinted Serendib Efreet and the constrastless coloration. The goal to achieve a fancier appearance failed; this time, the colors became too dark and another error lead to the infamous blue Hurricane misprint. For that, the set wasn't released officially, however, a few booster boxes were accidentally shipped to different places in the USA and Western Europe. In addition, cards exist that Wizards allowed their employees to pick from a scrap container before the rest of the print run was pulped entirely.

Summer Magic cards are printed with the Legends design: The copyright line was diminished and the year date added. The name's font is narrower than the previous, it was only used for English Legends, Summer Magic and English The Dark. The frame was enlarged (since Arabian Nights) and the beveling resized. 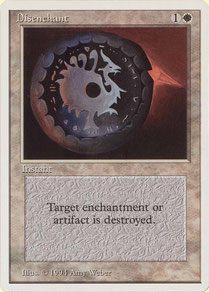