Hydraulic presses are used for cutting the corners of Magic cards.

Some cards are cut from the front to the back (front cut). Front cut means the cards were face up when the corners were cut.

Some cards are cut from the back to the front (back cut). Back cut means the cards were face down when the corners were cut.

This leads to different burrings. Cards with the burr on the back are front cut. It can be seen when the card is held against the light: 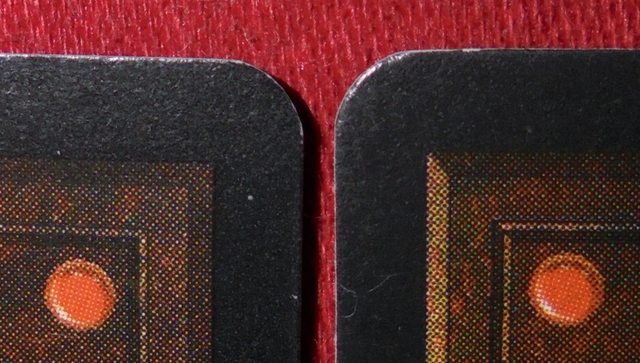 Left: front cut. The burr is pointing to the beholder. Right: back cut. The corner is reflecting the light where the cardstock became squeezed during cutting. 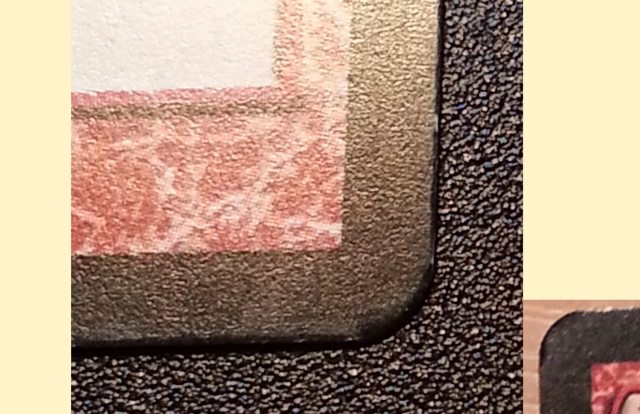 If the cutter didn't work accurately, there are white spots on the corners even if the cards are pack fresh (If these are on the back, the card is front cut):

White spot on the corner from cutting. (On this card the spot is on the front, thus it's back cut)

Front cut cards tend to loose ink on the back corners easier than on the front, because the burr is very vulnerable to that:

Some sets were printed in factories which used different corner rounding dies. The corners were (supposed to be) rounded nicer, but it actually looked rather strange unless cut very exactly (which was almost never the case). For that, it will be referred to as weird cut. The following picture shows an extreme example: 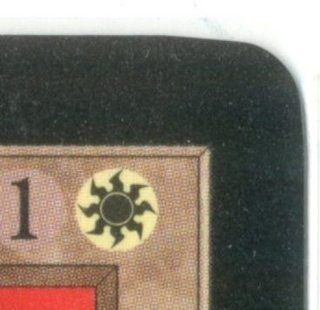 Note that not all cards from the sets listed above seem to exist in front cut.

Starting in 1996, Wizards also used various printers in the United States, where the cards were always front cut. In 5th Edition, Tempest block and Urza block the black border on the reverse is saturated black, the surface a bit shiny, whereas the Belgium counterparts are rather dark grey.

Preconstructed decks until 2003 and two-player starter sets from 5th and 6th Edition are all front cut, too, even if they are from the Belgium factory. However, these don't feature the extra dark border on the back.

The point of printing of following sets is questionable:

Boxes: Made in the USA

Beginning in 2003 with 8th Edition, sometimes European languages have been printed in the USA, too. They don't vary as much in color as previously and thus are not discernible from the preconstructed deck versions. Since 9th Edition, made in Belgium preconstructed decks haven't always been front cut anymore, the cutting also varies between languages.

Starting with Innistrad in 2011, the booster cards of all languages have been front cut. Short before, some sets were completely back cut again, for example, Magic 2011/Rise of the Eldrazi (except English) and M12. M11 intro packs have back cut and front cut languages; no front cut versions from M12 intro packs are known so far; M12 event decks are front cut.

Since 2013, Japanese booster cards have been printed in Japan with perfectly rendered corners. The surface is glossy and very slippery. Starting with Ultimate Masters in 2018, the Japanese factory has also produced English cards for supplemental sets.